New diagnostics and modeling approaches for dynamic processes of economics have been considered. It has been shown that most of economic variables exhibit complex fractal temporal behavior rather than simple trends or cycles implied by traditional approaches of economic time series analysis. Fractal analysis indices are suggested that allow to obtaining valuable information about degree of process stability in the system and provide new possibilities for forecasting in economics and planning. An appropriate data source for demonstrating the advantages of fractal analysis are exchange rate fluctuations. We considered and analyzed fractal structure of British Pound, German Mark, Swiss Franc and Japanese Yen exchange rate time series in 1992-1995 using a nonstationary generalization of the Hurst’s rescaled range technique. The results indicate advantages of the proposed fractal-based approach over conventional time-series analysis methods in forecasting the prevailing tendencies in exchange range dynamics over a broad range of time scales.

O.Y.Uritskaya. Application of Fractal Approach to the Analysis of Fluctuating Processes in Economics // In: Advanced Methods in Management, St.Petersburg: SPbSTU Press, 1997, p.142-149. 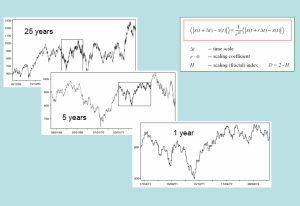 Fig. 1. Computer simulation of a self-affine fractal processes described by the scaling index H. Note the presence of time variability across vast ranges of scales, which is a signature of many real market processes. 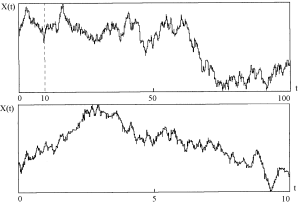 Fig. 2. Examples of a self-affine stochastic process before (a) and after (b) x10 stretching of the time axis.